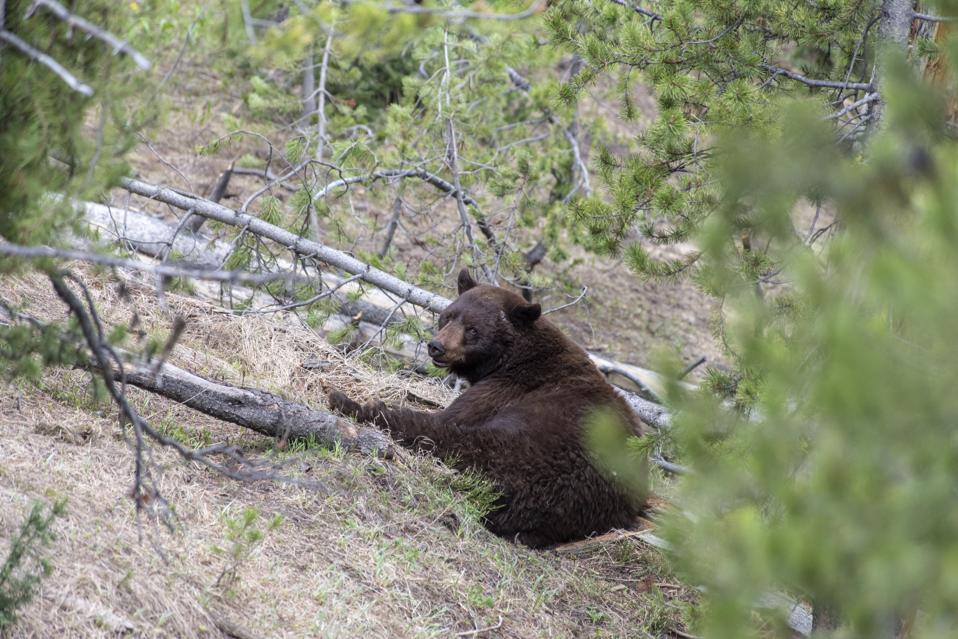 YELLOWSTONE NATIONAL PARK, WY – JULY 30: A black bear rest in a mixed age forest that partially burned in 1988 on June 30, 2018, in Yellowstone National Park, WY. The fires in 1988 burned 793,800 acres, 39% of Yellowstone’s 2.2 million acres. After 30 years most of the parks lodgepole pines destroyed in 1988 have regenerated and are thriving. (Photo by William Campbell/Corbis via Getty Images)

On Sunday night, 5 August 2018, Yellowstone National Park will be the center of a live broadcast inside of the park in the first of four live TV shows called Yellowstone Live which is produced by Plimsoll Productions and Berman Productions for National Geographic.

Yellowstone Live is an attempt to showcase the natural history and science of the oldest national park in America founded in 1872. Throughout the four live TV shows, the program will have more than 34 live cameras set up over the 2.2 million acre park in the hope they’re able to capture wolves, Grizzly bears or any one of the other 400 animal specials or natural events like Old Faithful. The show will also look cover the greater Yellowstone Ecosystem including Gallatin Mountain Range and Lamar Valley.

The four live shows will be hosted by Josh Elliott, TV journalist and former anchor for Good Morning America. Elliott is joined by Chris Packham, a British broadcaster, and presenter of BBC’s BAFTA award-winning program series, Springwatch, Autumnwatch, and Winterwatch.

“The idea of the show is that wherever the excitement is, that’s where the cameras will go. If the ground squirrels are kind of giving it to us on that night, we’re going to be giving you the ground squirrels. But we’re hopeful, to see some alpha predators, because it isn’t often you can see a Grizzly Bear, doing Grizzly Bear things,” said Elliott. “We’re going to be very careful not to promise the audience, ‘you’re going to see wolves, so watch.'”

“From a filming point of view huge sections of the park are still inaccessible,” adds Packham. “The park does a great job of handling the 4.25 million people that visit it each year at the same time, not damage the ecosystem that exists there.”

“Within the park, there’s a great educational connection between animals and humans. Grizzly bears have moved outside of the park, and there is still conflicts with bears and people, and ultimately humans are always going to win unless you shout loudly for the animals. So Yellowstone Live looks at that human/animal conflict which offer a sort of public service information component,” said Packham.

Yellowstone National Park doesn’t allow any drones inside the park boundaries, so this means that the cinemaphotographers had to come up with different ways to capture wildlife.

Some of the technology involved to make this happen throughout the park are thermal cams, a helicopter, a cam ball in a beaver lodge, nine Go-pros, and a fiber optic thermal camera inside of a squirrel burrow.  The thermal cam, called the Magma Cam by the executive producer, Allen Berman, will reveal Yellowstone’s thermal activity. There will also be pre-filmed content in addition to the live streams as well as segments of educational content.

As part of that public service component, the Yellowstone Live team has set up a campsite incorrectly to stage all of the most common mistakes that a typical camper makes. This is being done in conjunction with the Grizzly and Wolf Discovery Center in West Yellowstone.

“The Discovery Center has rescued bears that either became too comfortable with humans or that was injured and would not have otherwise survived in the wild but are, in all other aspects, Grizzly bears,” said Elliott. “In our campsite (for Yellowstone Live) we’re going to hang the food too low, leave food strewn about, not hang the trash; we’re going to make it interesting for the viewers and show them live and in real time, what happens when you aren’t respectful of wildlife.”

“Yellowstone is one of the jewels in the crown [..], and I have been reading and learning about Yellowstone since I was a child, reading about it in National Geographic magazines,” said Packham. “If you have an interest in natural history and conservation, environmental care, you have an awareness of Yellowstone. Because the park and the surrounding greater Yellowstone ecosystem are incredibly important. There are very few places left in the northern hemisphere where there is this amount of space and freedom and degree of protection for the things that live there.”

“But, in an over-crowded world where our natural resources are running thin, where our species are ever increasingly imperiled, obviously you know what I’m going to say, I’m going to say we should push the balance to protect those species, ” Packham emphasized. “From an outside perspective, you don’t know what you’ve got here (with Yellowstone) and what you’ve got is absolutely astonishing. And that’s why we (in the UK) are envious. It’s not only astonishing because of the protective value that it offers but also the ability to study it. We’re looking at creatures here which are living in situations which are as natural as it possibly could be and there isn’t a single square meter of the UK where we could claim to be doing that.”

“I still struggle to find beauty in the humans because we disrupt all of those environments and are very often a spanner in the works, as we say, the fly in the ointment,” said Packham. “But the animals and the complexity of that balance, is always going to be beyond our comprehension really. I think we’re close to a turning point, but sometimes you almost have to hit rock bottom before you bounce back.”

“I study those ecological roles, but often this ends up in conflict with people. Most parks in the world are not big enough to contain or sustain their wildlife, so trying to understand how to reduce those conflicts outside the park with people is important,” added Middleton.

“These animals have roles we need to understand. They are natural wonders that you just can’t park your car next. We’ve been trying to go into the backcountry and into the places where this is happening and bring that wonder for people to see,” said Middleton. “Through this Yellowstone Live broadcast, National Geographic can bring the hidden lives of these animals, kind of natural wonder, to an audience e that people like me will never reach otherwise.

“If we want people to keep seeing that wildlife in the park that means people in concentric circles way outside the park need to be positively engaged in many different conservation solutions,” said Middleton. “For migrations, it’s habitat conservation, protections, maybe conservation easements, fencing, retrofits to be wildlife-friendly, road overpasses and underpasses. A scary thing at this time in our country and our world is people are pulling apart. For these animals, we need people to come together. I think [..] this kind of public communication broadcast can help,” added Middleton.

“Yellowstone is always telling a story, and I hope that it can one day be and project the story of how can people find common ground, whatever the issue is, and come together around the set of solutions that works,” said Middleton.  “We can’t just say, let’s just make the park bigger and remove the people. There’s going to be people, so we need to figure out how people can coexist with these creatures.”

Elliott says that aside from hoping to thread needles about nature, science, conservation, and education in Yellowstone Live, the audience gets to see these animals in their natural habitats.

“Yellowstone Live [..] is about appreciating the delicate balance that they strike here, and in national parks around the country and the world, every day, which is conservation and access, and how you ensure that people can enjoy their park but also stay true to the mission. In some instances, that means that the endangered species that live here are allowed to flourish and perhaps get off that list rather than head the other way,” said Elliott.

“I believe that Yellowstone Live is an apolitical broadcast, and will highlight the countless natural wonders that our country holds as well as the fragility that these species face without concerted efforts on their behalf by the other species who can determine whether or not the aforementioned species thrive,” quipped Elliott.