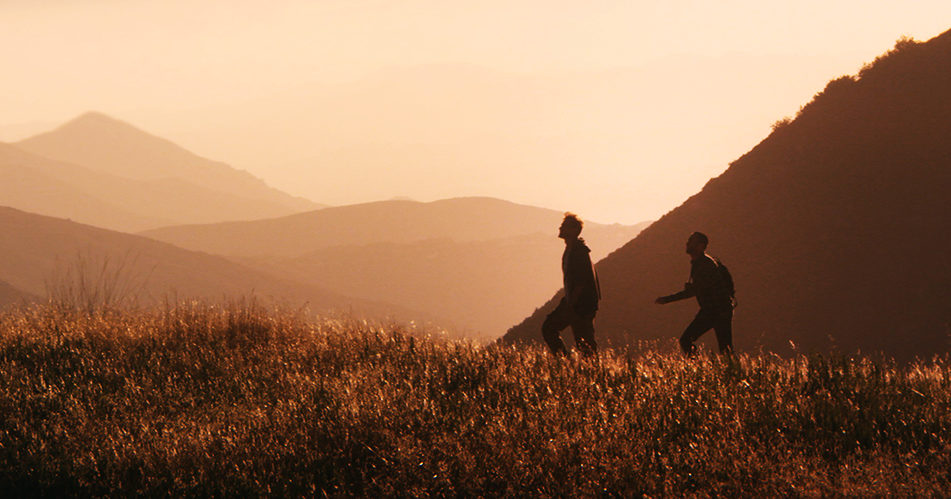 Over the past five years, Justin Benson and Aaron Moorhead have released a trio of amazing low-budget sci-fi/horror films: Resolution, Spring, and The Endless. Science fiction author Christopher Cevasco says that what sets these films apart is their focus on compelling characters.

“The performances have to be really strong to pull off movies like these,” Cevasco says in Episode 339 of the Geek’s Guide to the Galaxy podcast. “They’re not reliant on special effects or crazy visuals. You’re immediately pulled in by the characters.”

Benson and Moorhead are real-life friends, which definitely shows in the way that they portray male friendship. For writer Sara Lynn Michener, that’s a welcome change from horror movies in which the characters are both disposable and detestable.

“I really appreciate that they are putting a lot of emotionally intelligent male characters in their films,” she says. “We see a lot of stereotypical male behavior in film, and it’s really lovely to see a film about a man taking care of his friend.”

Geek’s Guide to the Galaxy host David Barr Kirtley hopes to see more low-budget sci-fi films like The Endless. “I just think this should be so inspiring to other filmmakers, that you can make movies like Resolution for $3,000 and have 92 percent on Rotten Tomatoes,” he says. “This is a model for other people who want to do that.”

Benson and Moorhead are currently at work on a bigger-budget movie, Synchronic, starring Jamie Dornan and Anthony Mackie. TV writer Andrea Kail hopes the new film is able to maintain the same sensibility as their earlier work.

“I just hope they retain their creative independence, because they’re amazing storytellers, and that should be encouraged, and not reined in by a bunch of idiot studio executives,” she says.

Listen to the complete interview with Christopher Cevasco, Sara Lynn Michener, and Andrea Kail in Episode 339 of Geek’s Guide to the Galaxy (above). And check out some highlights from the discussion below.

“Let me say this—and I’m sure NYU will come after me now—but if you want to be a filmmaker, don’t go to film school. Just don’t. It’s useless. You’re wasting your parents’ tens of thousands of dollars. All you need to do to figure out how to make a great film is watch movies—watch a ton of movies, read the scripts. You can download a million scripts off the internet. Watch the movies, read the scripts, take it apart, deconstruct it, figure out how it works, put it back together—like an El Camino on your front lawn. That’s how you figure out how to be a filmmaker, that is the way to do it. Don’t waste your parents’ money, don’t go to film school. It’ll ruin you.”

“I went to Vacation Bible School growing up, and I was watching [The Endless] thinking, ‘Nope, this is terrifying.’ I always wonder whether it’s more terrifying for me or for anyone else who was raised in a restrictive thought environment, because there’s a very thin line between Vacation Bible School—which is this super-happy friendly innocent thing—and cults where people just decide to kill themselves. There’s a very thin line between those things. So I love movies that explore the horror of groups of people that get together and formulate these terrifying ideas. But yeah, the cult was totally believable to me.”

“There are some overt references [in The Endless] describing this entity as something we can’t quite see because its colors are off of our spectrum, and so of course those are all references to ‘The Colour Out of Space,’ which is a short story by Lovecraft. It’s about a meteor that crashes in a farm district and starts driving all the people in the area mad, turning the livestock into monstrosities and making all the vegetation really big and overgrown but also rotten and disgusting. A lot of those themes were used in the movie Annihilation which came out last year—I think Jeff VanderMeer is explicitly playing with a lot of the themes from ‘The Colour Out of Space’ in his book that the movie was based on. So there are definitely a lot of overt references to that.”

“When you make an indie film, you’re the creator, and you have creative license because you’re not beholden to anybody. The minute you make a studio film, you are accountable to a bunch of accountants and a bunch of mid-level studio executives who went to the Peter Stark program at USC and then took a McKee seminar and suddenly think they’re film geniuses, and then they start giving you notes and telling you what to do. That’s what I fear. I hope it doesn’t go that way, because [Benson and Moorhead] have a very clear voice and they know what they’re doing, and I hope some dingbat 27-year-old kid doesn’t go, ‘Well I think it should be this.’”