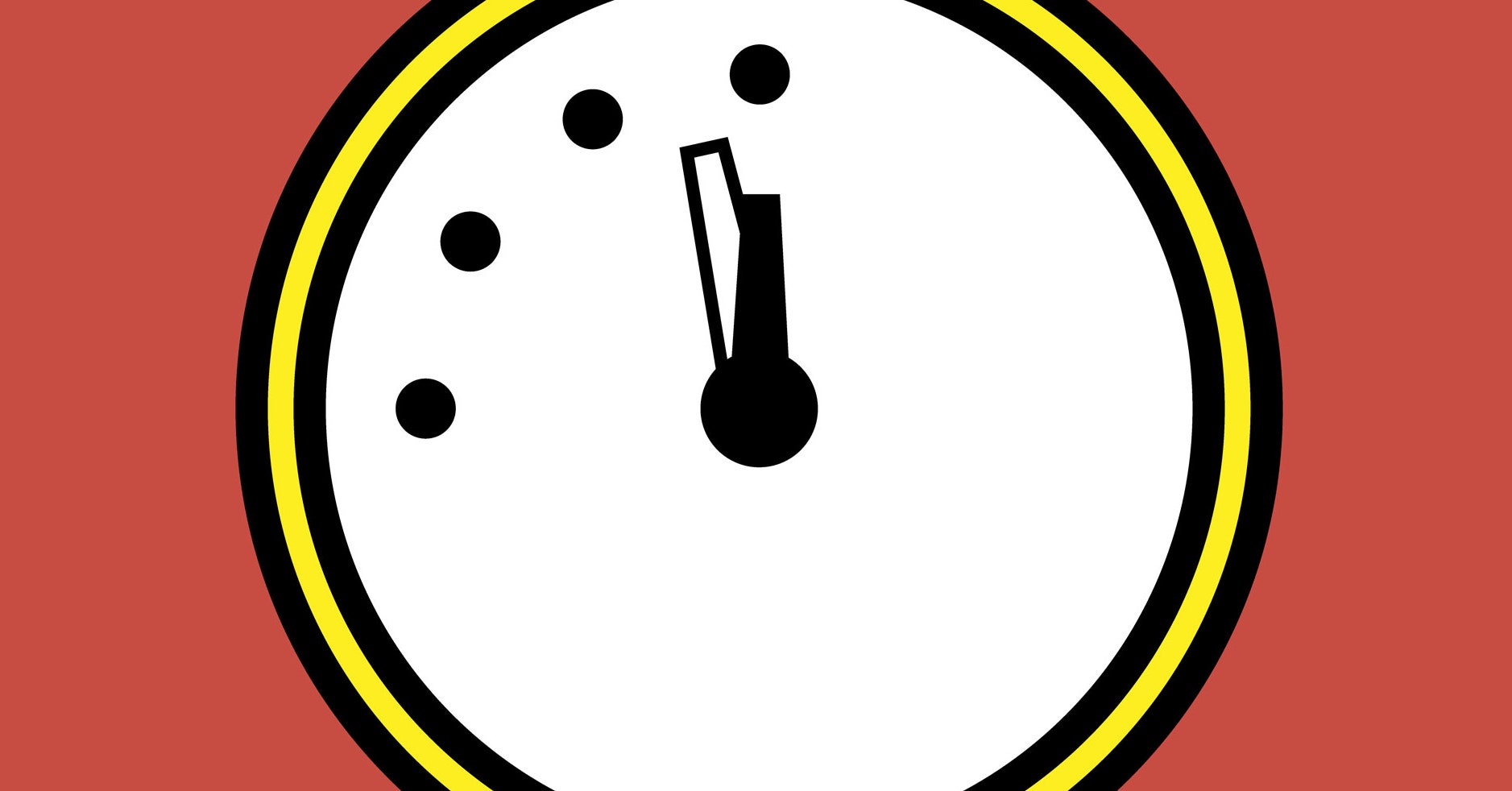 The accidental missile alert in Hawaii earlier this month made real for 38 terrifying minutes the vague, low-level dread that permeates American life today: Nuclear war seems closer and more real than it has in a generation. Even the pope—not exactly a fear-monger—said last week that the world now stood at “the very limit.”

That existential fear was affirmed today by the organization of nuclear scientists who have spent seven decades trying to turn humanity away from nuclear weapons: The Bulletin of Atomic Scientists moved its “Doomsday Clock” 30 seconds closer to “midnight,” an unofficial barometer of how close the world stands to a man-made catastrophe. It now stands two minutes away.

“To call the situation dire is to understate the danger,” said Rachel Bronson, the head of the Bulletin, at the National Press Club in Washington, DC, Thursday, announcing the clock’s new setting.

The clock dates back to 1947, when the scientists who participated in the Manhattan Project wanted to create a mechanism to warn of escalating global tensions and the danger of global Armageddon. The iconic stylized timepiece has since become the global arbiter of dread—or hope. It aims to answer two questions: Is the future of civilization safer or at greater risk than it was last year? And how does today’s risk compare to the risks we’ve experienced over the last 71 years?

The graphical clock started at seven minutes to midnight, its two-dozen changes since marking the shifting tensions of the Cold War. Its “peacetime” rating peaked in 1991 at 17 minutes to midnight, as the Soviet Union broke apart. It has gradually ticked darker ever since, first as nuclear weapons proliferated to countries like India and Pakistan, and then as it began to factor in other global threats, like climate change.

Last year, for the first time, it ticked forward a half-minute, reflecting the rise of nationalism and the threat to the post-war international order, as well as President Donald Trump’s troubling supportive comments about the appeal of nuclear weapons, and his climate change skepticism.

At the time, he’d been president only a few days; there was little track record to measure his actions versus his campaign rhetoric. But as Bronson told me last month, “Many of our fears played themselves out in 2017… A lot of our concerns were really borne out.”

Today’s movement of the Doomsday Clock—announced live in a webcast—was yet another sign that the world stands on a precipice perhaps unparalleled in the modern era. It hasn’t sat this close to midnight since 1953, a few months after the United States and Russia tested their first thermonuclear bombs.

Last week, as he started a trip to South America, Pope Francis handed out to reporters aboard his Alitalia plane a photo from 1945 that depicted a Japanese boy carrying his dead brother in the hours after the US bombing of Nagasaki, a nuclear weapon roughly equivalent to what US intelligence believes North Korea possesses. The Pope cautioned his travel companions, “I am really afraid of this. One accident is enough to precipitate things.”

The Pope’s comments reflected, whether intentionally or not, the strong sense of the presidents who lived through the danger of the Cold War: They rarely feared the superpowers intentionally launching global general thermonuclear war. Instead, what men like Dwight Eisenhower, John F. Kennedy, and Ronald Reagan feared was a rapid escalation through miscommunications, misunderstandings, and miscalculations that resulted in the two countries stumbling into a war neither intended.

As it turns out, if there’s one critical geopolitical lesson of the Cold War—one that should be impressed on every commander-in-chief in turn—it’s that nuclear war is actually hard to avoid.

Eisenhower, the former Supreme Allied Commander and the president who perhaps knew war better than any other during the nuclear age, declared that his proudest accomplishment was seemingly the simplest: “We kept the peace. People ask how it happened—by God, it didn’t just happen.”

During Eisenhower’s eight years, the United States and the Soviet Union repeatedly had to take active action to step back from escalating tensions. Many times, in fact, Eisenhower sat in rooms as president where military leaders recommended war as the best option—where, incredibly, starting a war would have been easier politically than choosing peace. It seems hard to imagine today, but the US seriously contemplated the use of nuclear weapons in the Korean War, and even to defend the islands of Matsu and Quemoy in the Taiwan Strait from invasion by the mainland Chinese military.

Eisenhower paid a political price for his forbearance. Democrats hammered him in the midterm 1958 elections as “soft on defense,” and Ike’s reputation as a peacemaker helped John F. Kennedy defeat Vice President Richard Nixon in the 1960 presidential race.

Kennedy, though, quickly came to agree with Eisenhower: Keeping the peace is often harder than going to war.

The US has invested trillions of dollars in a sophisticated defense and intelligence apparatus that, left to its own devices, protectively escalates the country to war.

More simply put, war is the default setting. Only through careful, sober, active leadership has the US avoided a nuclear exchange since 1945.

Kennedy’s own scare came in 1962, as the Soviet Union loaded nuclear-armed missiles into Cuba. In reading historian Barbara Tuchman’s The Guns of August—which traces how the Great Powers defaulted, almost accidentally, into beginning the Great War in the summer of 1914— Kennedy fixated on a conversation between two German leaders.

“How did it all happen,” asked a former German chancellor of the current chancellor. The latter, who had led his nation into the terrible, destructive “War To End All Wars,” replied, “Ah, if only one know.” Amid the Soviet standoff, President Kennedy told his brother Bobby that his driving motivation was to avoid a history book someday entitled The Missiles of October.

Indeed, the more historians have learned about the Cuban Missile Crisis, the more we’ve realized how correct Kennedy was: Kennedy and Soviet leader Nikita Khrushchev communicated poorly throughout the faceoff, and both sides misunderstood the others’ motivations, red lines, and military readiness. Numerous scares could have escalated: A routine preplanned U-2 surveillance flight strayed into Soviet airspace; a US attempt to scare a Soviet submarine resulted in the sub readying its nuclear-tipped torpedo.

In the context of the last seven decades of near-misses, the accidental Hawaiian missile alert is remarkable only in that was a public-facing mistake. Over the years, warning systems on the American and the Russian side have mistaken satellites, flocks of birds, and even the rising moon as incoming surprise missile attacks. Boris Yeltsin—back when the Doomsday Clock stood at a remarkably peaceful 14 minutes to midnight—was actually handed the Russian nuclear briefcase, known as the Cheget, in 1995 when Russian radar mistook the launch of a Norwegian scientific rocket for a surprise attack from a US submarine. He had less than five minutes to decide whether to launch a retaliatory strike.

The Cold War saw all manner of high-level scares. Jimmy Carter’s national security advisor, Zbigniew Brzezinski, was awoken one night with news that 2,200 Soviet missiles were on their way to the United States. He was preparing to wake the president for a retaliatory strike when word came through that the incoming missiles were just a computer glitch, a gremlin inside the system at NORAD. Brzezinski never bothered to wake his wife, figuring that she’d be dead anyway in a few minutes, so why bother her?

The Soviets misinterpreted the 1983 NATO nuclear weapons command exercise, known as ABLE ARCHER, as the preparations for a surprise attack and readied their own forces to respond. “In 1983, we may have inadvertently placed our relations with the Soviet Union on a hair trigger,” a classified 109-page US intelligence review later concluded.

In 2018, the focus instead lies on North Korea, as the isolated regime’s rapidly progressing missile program has become the center of geopolitical tension. During the first of what have now become regular scares, news reports circulated of a US aircraft carrier battle group steaming rapidly to the Korean peninsula—only to report days later that the Pentagon had garbled the location. The ships were, instead, thousands of miles away off the coast of Australia.

For a weekend, though, Kim Jong Un might have correctly believed the US was coming to kill him—and acted accordingly.

Each time until now, careful reflection and cautious leadership—leadership on all sides in all countries—in these crises has de-escalated rather than escalated. As President Trump has repeatedly shown, past is not necessarily prologue when it comes to nuclear weapons, particularly as more nations arm themselves and as the global rise of social media can spread reports—accurate or not—faster than policymakers can understand it, increasing the chances of miscalculations.

The current system makes nuclear war easier to start than to avoid; there’s precious little room for reflection. The first ICBMs will leave their silos just four minutes after a presidential order; once they launch, there’s no mechanism to stop them. And country on the planet possesses the capability to shoot down an incoming strike.

Today’s Doomsday Clock announcement offers a critical reminder that continuing Eisenhower’s dictum that he “kept the peace” requires the continuation of active, steady leadership throughout the world.

In an age where the blunt instrument of 140-character tweets all but beg to be misinterpreted, it’s a reminder that can’t be stressed enough.

The Threat of War