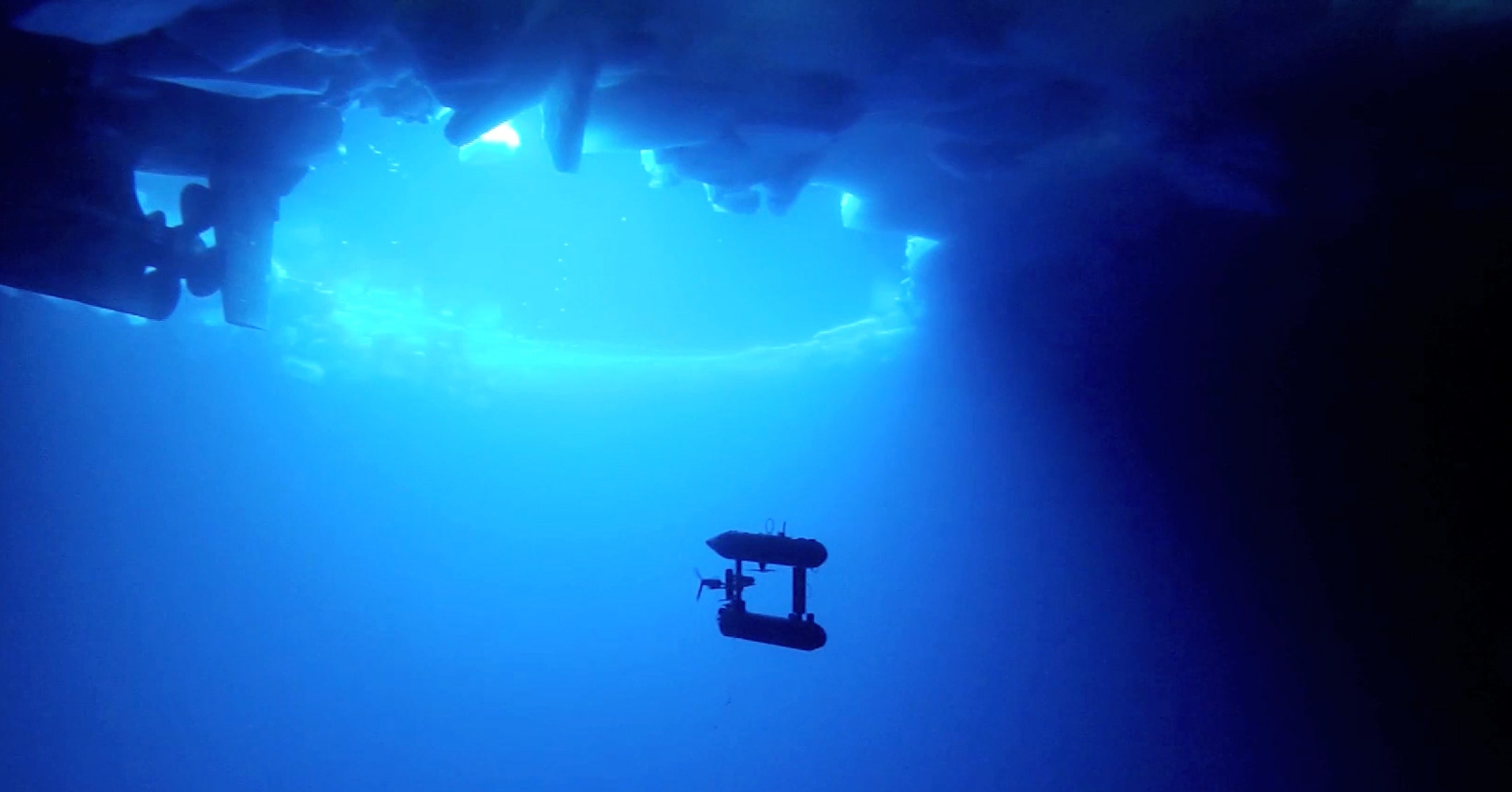 The lava fields of Hawaii. The peaks of the Himalayas. The crowds of a Justin Bieber concert. These are among the most perilous of environments on planet Earth, places where few humans dare tread. They ain’t got nothin’, though, on waters of our planet’s polar regions, where frigid temperatures and considerable pressures would snuff a puny human like you in a heartbeat.

Robots, though? This is the stuff their tough-as-hell bodies were made for. This is the domain of Seabed, the sensor-packed machine that dives over a mile deep into the polar seas—autonomously—collecting invaluable data. But it comes at a price: Getting the bot back to its icebreaking boat alive can be more challenging than communicating with a Mars rover millions of miles away.

Seabed doesn’t swim like your typical autonomous underwater vehicle. Most are shaped like torpedoes, which allows them to efficiently cut through the water like jets. Seabed instead can use its propellers to hover in the water column like a helicopter. This allows it to hang over the seafloor and map it with sonar, or cozy up next to ice to measure its thickness.

The robot can’t be tethered for hardwired communication, on account of the ice, and radio waves don’t work underwater. So instead, Seabed sends signals of sound (like MIT’s hypnotic fish robot). Even then, the robot isn’t always a reliable communicator. “If we are lucky, we get a 256 byte packet once every minute,” says Northeastern University roboticist Hanumant Singh, who developed Seabed. “And there are no guarantees that we can get it.” Compare that to how NASA scientists communicate with Mars rovers: The signal takes an average of 20 minutes to get from the robots to Earth, but at least it’s consistent. If Singh needs to ping Seabed, the signal might not get there.

To account for the dropped signals, Singh gives the robot a course to, say, run along a particular stretch of the seafloor and map it with sonar. If something appears to be going awry, like colder weather blows in and starts freezing over the ice hole Seabed’s supposed to surface in, Singh can send a signal to cut the mission short. Ideally, it reaches the recipient quickly. (He’s only lost one of these robots, by the way, not because of a communication breakdown but because an intense current swept it away.)

If Seabed comes up in the wrong spot under thick ice, there’s also no guarantee its operators can get it out of the water. It may come up near the icebreaker, like on one mission in 2010. You can’t go breaking ice willy-nilly near a $500,000 robot, so the researchers had to dig a small hole in the ice. This gave them access to the vehicle, to which they attached weights to sink it a bit, but also a float to keep it from plummeting to the bottom of the sea. Then the ship could crack open up the ice further—carefully still, of course—and pull the robot out. On another nearly ill-fated mission, the researchers had to deploy a smaller tethered ROV to grab Seabed and tow it safely to open water.

Generally, though, Seabed returns to within just a few meters of where operators expect it to surface. Again, if the robot weren’t reliably autonomous, this environment would eat it alive.

And once Seabed is in the water, it’s happy as a fish in … water. It’s sealed up nice and tight to keep freezing water from infiltrating the electronics. So if you bring it out of a warm ship hangar and drop it in the sea quickly, it’ll be alright. Where things get problematic is when you have to pull the robot out of the water, then expect to use it again right away.

“You put the vehicle in the water and you’re doing a test and you realize, oh, we forgot something,” says Singh. The water itself is around 40 degrees Fahrenheit, but the air drops to zero degrees. “You bring the vehicle back up and now it’s completely encased in ice.”

But enough about problems. Seabed is one tenacious science machine, whose job is more important than ever in these times of climate change. In addition to mapping the seafloor with sonar, it can do the same with ice to measure its thickness.

Which, sure, you could do by drilling lots of holes and dropping tape measures through. But sea ice turns out to be beautifully complicated. “In the Arctic and the Antarctic, ice isn’t just sitting there and thickening as it freezes on a lake,” says sea ice physicist Ted Maksym of the Woods Hole Oceanographic Institution, who has worked with Seabed. “It’s moving around and all the flows are crashing into each other, and when they do they form these huge piles of ice.”

These features develop not only above the surface, but as much as 60 feet deep, which Seabed can map with sonar, swimming back and forth across the face of the ice. “It’s just like mowing your lawn from below,” says Maksym.

What Maksym wants to understand is how ice thickens and thins in polar regions. In the arctic, for instance, old ice is disappearing, and ice in general is becoming more seasonal. “So understanding how the processes that govern the thickness of ice change as the arctic changes helps us understand how the arctic is going to respond to climate change,” says Maksym.

That means putting Seabed in danger, sure, but also means taking human divers out of danger. The robot may get stuck under the ice from time to time, but the data it’s gathering is vital to science’s understanding of Earth’s most brutal environments not affiliated with Justin Bieber.