It was one of those normally mundane end of year seasonal events.

But what I heard blew my mind and will substantially shape my trading and investment strategy for 2018.

By now you already know that I used some of my stock market winnings this year to buy a vintage Steinway concert grand piano (click here for“The Inflation Hedge You’ve Never Heard Of.”)

Well, you can’t own a Steinway without a recital, and ours was held last weekend.

After listening to an assortment of children display their skills with Pachelbel, Ode to Joy, and The Entertainer, we adjourned for a celebratory buffet dinner.

Making small talk with the other parents, I asked one particularly articulate gentleman what he did for a living. He too had enjoyed an excellent year, and also used his profits to buy a Steinway, although his was a cheaper upright model. 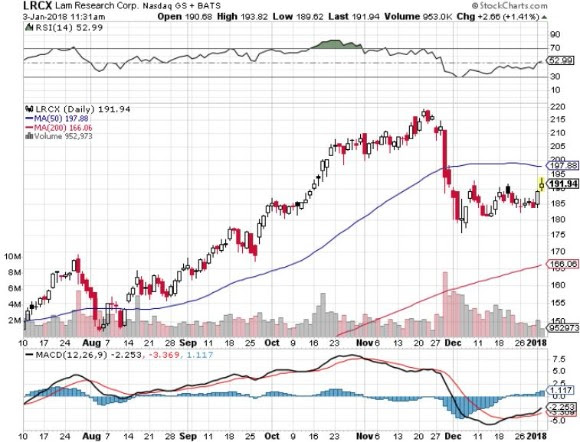 It turned out that he was the chief technology officer at Lam Research (LRCX).

Had I heard of it?

Not only did I know the company intimately, I had recommended it to my clients and caught the better part of the nearly 400% move since the beginning of 2016. Furthermore, I was expecting another double in the share price in the years ahead.

Was I right to be so bullish?

The man then launched into a detailed review of the company’s prospects for the next three years.

The blockbuster development that no one outside the industry sees coming is China’s massive expansion of its semiconductor production.

More than a dozen gigantic fabrication plants are planned, the scale of which is unprecedented in history. Some of these fabs are ten times larger than those built previously.

This is creating exponential growth opportunities for the tiny handful of companies that produce the highly specialized machines essential to the manufacture of cutting edge semiconductors, including Applied Materials (AMAT), ASML (ASML), Tokyo Electron (OTCPK:TOELY), KLA-Tencor, and LAM Research (LRCX). 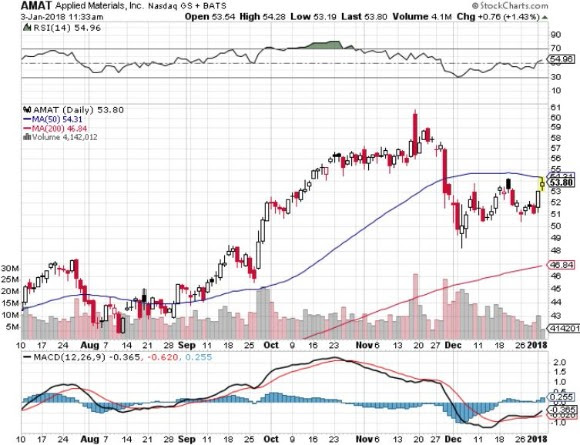 Everyone in the industry has boggled minds over the demand they are seeing for their products.

The reality is that artificial intelligence is rapidly working its way into all consumer and industrial products far faster than anyone realizes, creating astronomical demand for the chips needed to implement it.

Bitcoin mining is also creating enormous new demand for chips that no one remotely imagined possible even two years ago.

As a result, the industry has been caught flat footed with severe capacity shortages. They are all racing to add capacity as fast as they can. Profit margins are exploding.

That gives the shares a very reasonable price earnings multiple of 16.95X, a 10% discount to the 18X multiple for the S&P 500. That is an incredible deal for one of the fastest growing companies in America.

Samsung of South Korea was far and away it largest customer, accounting for 38% of total sales.

On November 14 the company announced an eye-popping $2 billion share repurchase program that is certain to drive the price higher.

If there is one dark cloud on the horizon, it is the loss of the research & development tax credit embedded deep in the proposed Republican tax bill.

This will have a noticeable and negative impact on (LRCX)’s bottom line. Still, my friend thought that the company could offset this loss with faster sales growth and margin expansion.

However, many other technology companies in Silicon Valley won’t be able to bridge that gap. It is a hugely anti-technology move for the government to take.

My fellow Steinway owner thought that LAM Research could easily see sales double in three years as long as there is no recession, which I believe is at least two years off. As for the share price, he couldn’t comment, but remained hopeful, as he was a large owner himself.

Of course, the trick is how to buy a stock that has just risen by 400% in two years. So you could start scaling in here, and build a larger position over time.

You only get opportunities like this a couple of times a decade, and it’s better to be too aggressive than too cautious.

Disclosure: I/we have no positions in any stocks mentioned, and no plans to initiate any positions within the next 72 hours.