FSRU stands for “Floating Storage & Regasification Unit,” and it’s a rapidly growing presence in the LNG shipping industry. HMLP’s parent/sponsor, Höegh LNG Holdings Ltd., is the largest provider of FSRUs in the market.

FSRU leasing/chartering solves many problems for charterer companies and countries. It’s slow and expensive to build an LNG import terminal, so FSRUs are being increasingly used to give countries access to LNG.

Like many of the firms we cover, HMLP operates on long-term contracts – its current average is 10.75 years for its five-vessel fleet, which includes two JV vessels. This is among the longest contract tenures that we’ve run across in the shipping industry.

Common unit coverage rose to 1.22X in Q2 ’18, which is the highest coverage level since HMLP’s IPO. Coverage has averaged 1.16X over the past four quarters:

“The Partnership has elected to be treated as a C-Corporation for tax purposes (our investors receive the standard 1099 form and not a K-1 form).”

In 2017, HMLP’s ROC ranged between $.188 and $.1979 per quarterly payout. Investors get the benefit of sheltered income, but ROC does decrease your basis, so take a look at this if you’re thinking of selling at some point down the road.

Management has had distribution increases of 4.2% and 2.3% over the past two years, while coverage has been over 1X since Q2 ’16:

HMLP also has a preferred series, Hoegh LNG Partners LP 8.75% Cumulative Perpetual Redeemable Units Series A (HMLP.PA). These are cumulative preferred units which offer you the additional protection of knowing that management must pay you any skipped distributions before it pays the common units. These units also rank senior to the common units in the event of a liquidation.

As is usually the case, these preferred units have a much higher coverage factor than the common units. Coverage has averaged 7.59 so far in 2018, on a net income basis, and 6.42X on a DCF basis: 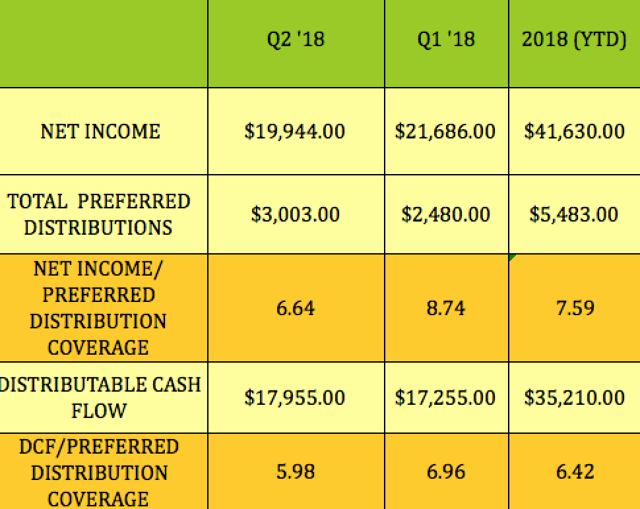 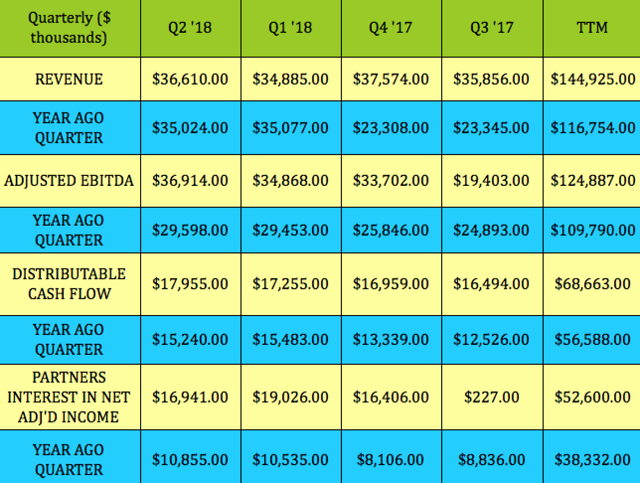 With the unit count flat, and distributions/unit rising just 3.24%, HMLP’s coverage expanded by 9.11% over the past four quarters, as DCF grew 21.34%: 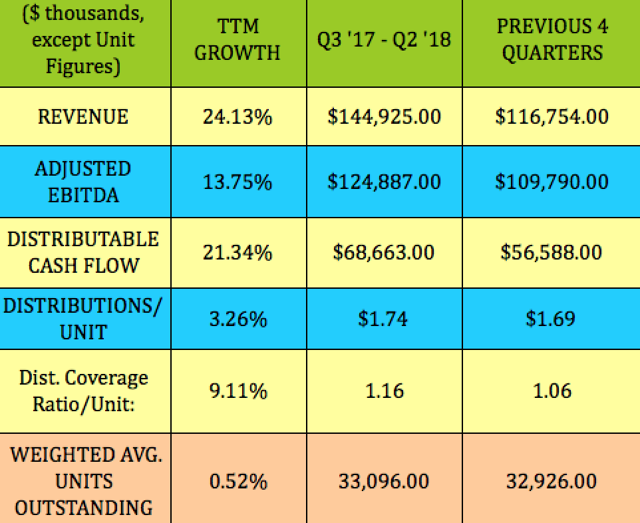 Boil-off issue – As we reported previously, HMLP has a “boil-off” problem. This still hadn’t been resolved, as of 5/31/18, when they reported Q1 2018 earnings. The charterer of the Neptune and Suez Cape Ann vessels filed a claim vs. these vessels, for excessive, past “boil-off.” The vessels are allowed a certain amount of LNG boil-off, (it’s related to gas which is ultimately being lost during a passage – in this case, it was when the vessels were being used for LNG transport years ago, before they were converted to FSRUs), but the charterer claims that they didn’t meet the performance standards for their contracts. HMLP’s 50% share of the accrual was approximately $11.9 million as of June 30, 2018.

However, HMLP is being indemnified by its parent company HLNG.

Management updated this info on the Q2 ’18 earnings call:

“The process has been a bit in limbo during the transition between NG and Total, but I think now Total have closed that transaction. We should be able to come to some kind of agreement on that in relatively short order.

But just to repeat again it’s not something will have an impact on the MLP.”

“EGAS has requested to start a discussion with Hoegh LNG over terms for the termination of the Gallant contract in advance of its April 2020 maturity. And that’s something that would require HLNG consent and compensation. From an HMLP point of view, should HLNG discontinue the charter of Gallant through its Egyptian subsidiary for the purposes of serving the EGAS contract, HMLP has the options to charter the Gallant to HLNG until 2025 at a rate, which is equal to 90% of its current rate. Whether it would in April 2020 or sooner, HMLP current exercised its options. If it does, the impact would negatively impact results over the current levels of distributable cash flow of over $17 million per quarter. The impact will be small enough to maintain a comfortable coverage ratio.”

Management updated this issue on the Q2 earnings call:

“I’d say that at least at the moment the discussions are quite good spirited. And I’m sure we’ll come to something, some kind of agreement. I mean they – I do want to take down to one FSRU that was clear they have got a lot of gas coming online. So that’s their need. And we’ve obviously got a contract in place.”

HMLP’s parent, HLNG, has additional FSRUs which it could eventually drop down to HMLP. However, it has been involved in lengthy contracting talks for some of its vessels. Management has previously indicated that they’d like to acquire a dropdown asset at least once each year.

The Independence vessel appears to be the next dropdown candidate. However, on the Q2 ’18 call, management said that,

“it’s difficult to see another drop down this year, not impossible, but difficult. Beyond that we’re obviously working very hard to make a few things come together. The Independence is possible. The projects in Australia, which the parents have been working on, that one solidifies, is possible. And then there is also a few other things out there which aren’t in the public domain that also would be possible.”

Like many other shipping stocks, HMLP has been underperforming the market in 2018, although it has outperformed the benchmark Claymore/Delta Global Shipping ETF (SEA).

HMLP has a slightly lower, but still very attractive yield, and better distribution coverage than other LNG carriers. It seems to be getting a slight premium for its better coverage in its price/DCF and price/book valuations.

This is good to see – HMLP’s ROA, ROE, current ratio, and operating margin have all improved over the past few quarters, while its debt leverage has become much lower.

The balance on HMLP’s revolving credit facility line will be further reduced in Q3 ’18, as a result of a $6M repayment made after the close of Q2 ’18.

HMLP doesn’t have options, but you can see over 25 other trades daily in our public Covered Calls Table and over 30 trades in our Cash Secured Puts Table.

We rate HMLP a buy, based upon its attractive, well-covered yield, and conservative debt management.

All tables furnished by DoubleDividendStocks.com, unless otherwise noted.

Disclaimer: This article was written for informational purposes only, and is not intended as personal investment advice. Please practice due diligence before investing in any investment vehicle mentioned in this article.

CLARIFICATION: We have two investing services. Our legacy service, DoubleDividendStocks, has focused on selling options on dividend stocks since 2009.

We scour the US and world markets to find solid income opportunities with dividend yields ranging from 5% to 10%-plus, backed by strong earnings.

We publish exclusive articles each week with investing ideas for the HDS+ site that you won’t see anywhere else.